NEW RELEASES FOR THE 68TH INTERNATIONAL TOY FAIR IN NUREMBERG

As one of the top five toy manufacturers in Europe, the Simba Dickie Group operates internationally with a workforce of 3,050 people. The range of toys includes more than 4,000 items. The Group will welcome trade visitors to the 68th International Toy Fair 2017 in Nuremberg with numerous new product releases.

In the latest Safiras collection, the magical dragons from Simba Toys have beautiful glittery wings. However, the affectionate characters are not meant solely for collectors. The plush version is ideal for hours of cuddling fun. In 2017, Safiras licence holders are launching new products such as board games, jigsaw puzzles, a Safiras dragon drink, audiobooks and backpacks. 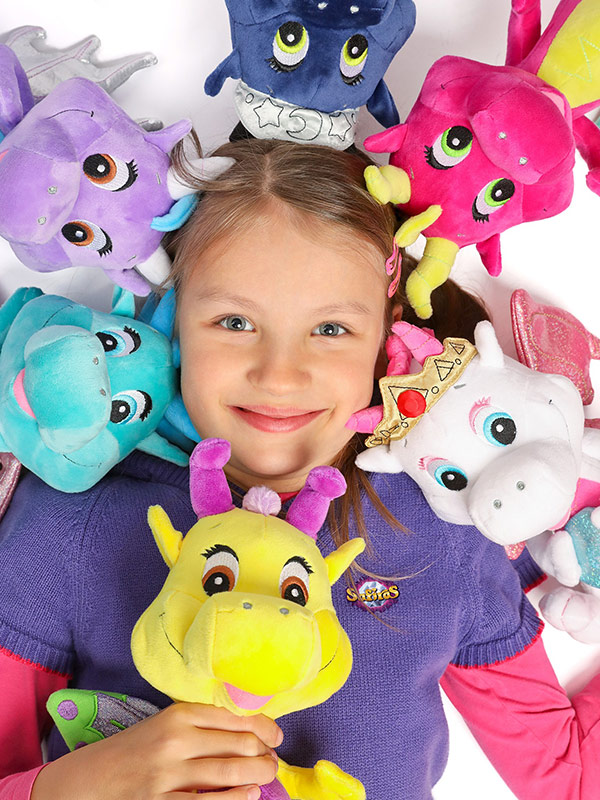 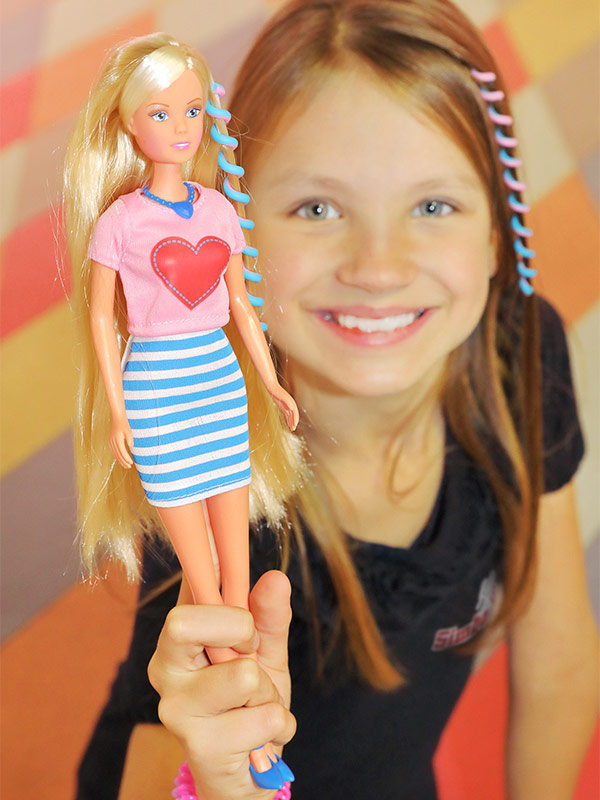 Enter Wissper’s world and discover this little girl’s ability to talk to animals as she embarks on exciting adventures – a popular children’s TV series that premiered on KiKA at the end of 2016. Simba Toys now offers a range of Wissper dolls and figures and a colourful array of small and large playsets.

Kion and Bunga are the two heroes of the new Disney TV series ‘The Lion Guard’. The plush action figures from Simba both speak original phrases from the show and have illuminating marks on their shoulders.

There are also plenty of new products in the Masha and the Bear range. The highlight is Misha the functional plush bear, who dances happily to music at the push of a button. 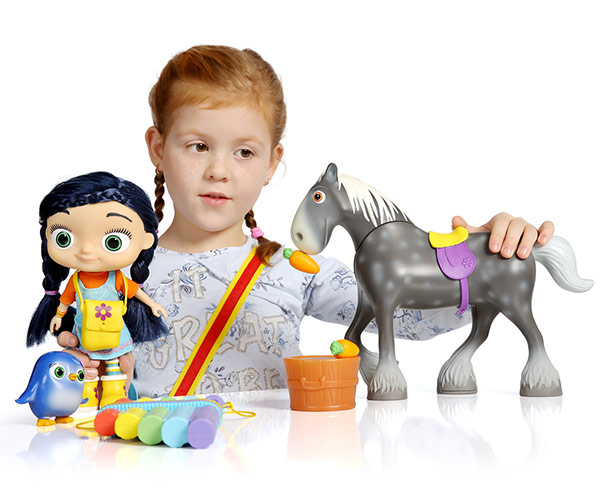 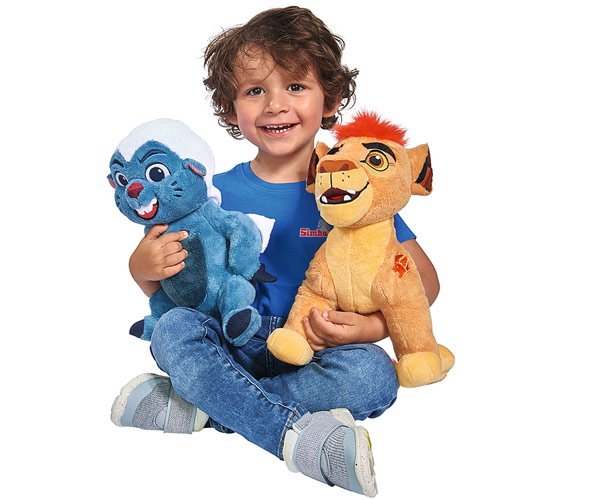 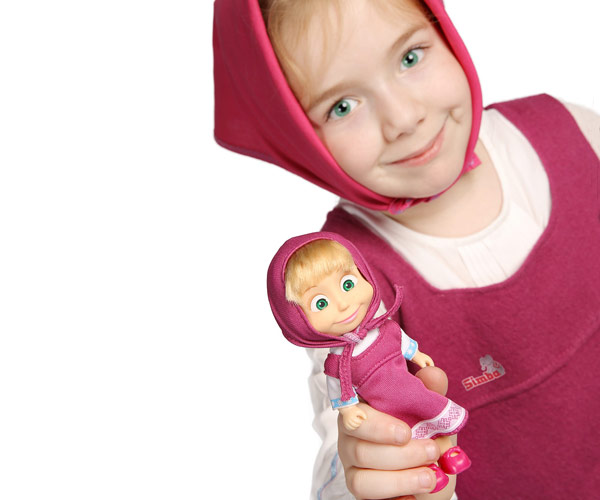 The leading French toy manufacturer Smoby Toys has once again demonstrated its talent for combining colours and shapes, coming up with the Cotoons Discovery House, an imaginative toy for inquisitive children aged 12 months and up. Cleverly rotating big saucer eyes, opening and closing windows, an electronic doorbell and much more promote the development of motor skills.

Thanks to the new Bob the Builder workbench with crane, the French company helps to turn playrooms into mini workshops. The extensive equipment, including tools, accessories and a large workbench, meets the requirements of even the most demanding builders. 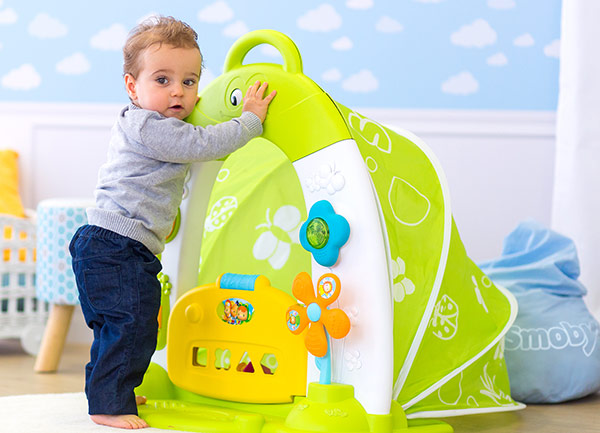 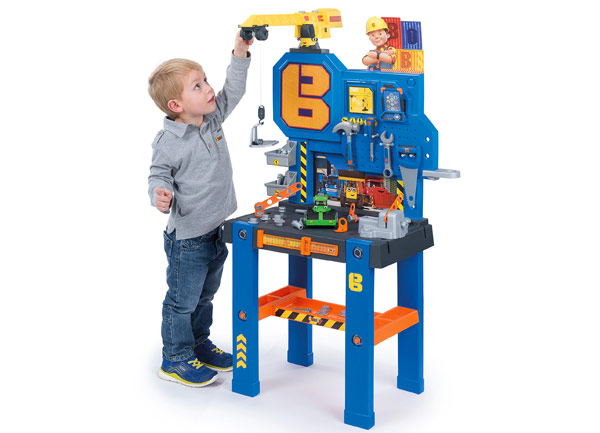 RC vehicles for children aged two and up are presented by Dickie Toys and the new Happy Scania Trucks. The battery-operated vehicles play pre-programmed sound sequences at the push of a button. The truck also moves in sync with the sound and accentuates this with a variety of light effects.

The animated TV series “Heroes of the City” is aimed at preschool children. The series can now be viewed in over 70 countries and in 25 different languages. The show has been extremely well received by children around the world and one billion YouTube video views a year speak volumes. The two main characters, Paulie Police Car and Fiona Fire Engine, express the meaning of friendship in a warm hearted style. Dickie Toys has obtained the Master Toy licence for the series and developed complete corresponding toy worlds. 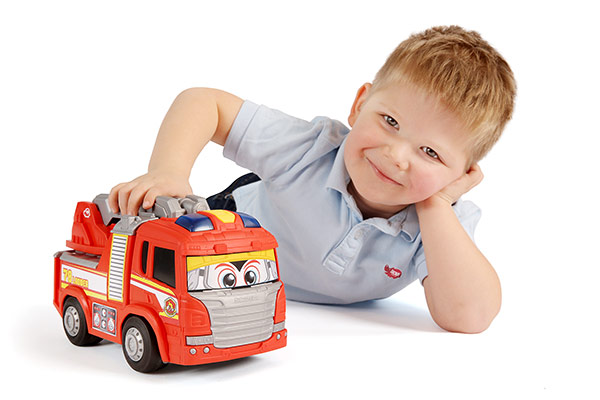 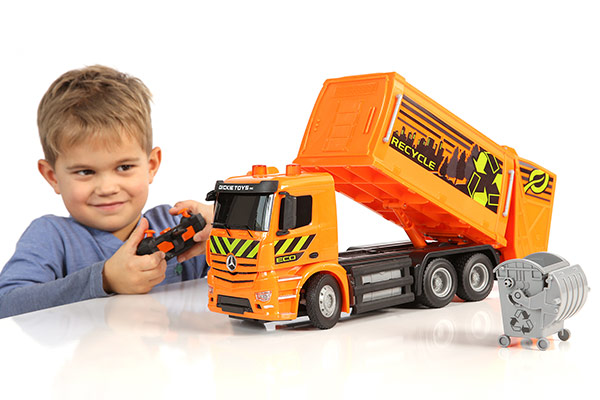 An absolute must for small and large sports car fans is the new Lamborghini world from Majorette. The latest models from the Lamborghini Aventador Coupé to the Lamborghini Huracán Avio are must-have classics for every collection. The highlights include a gift set and various racing sets. 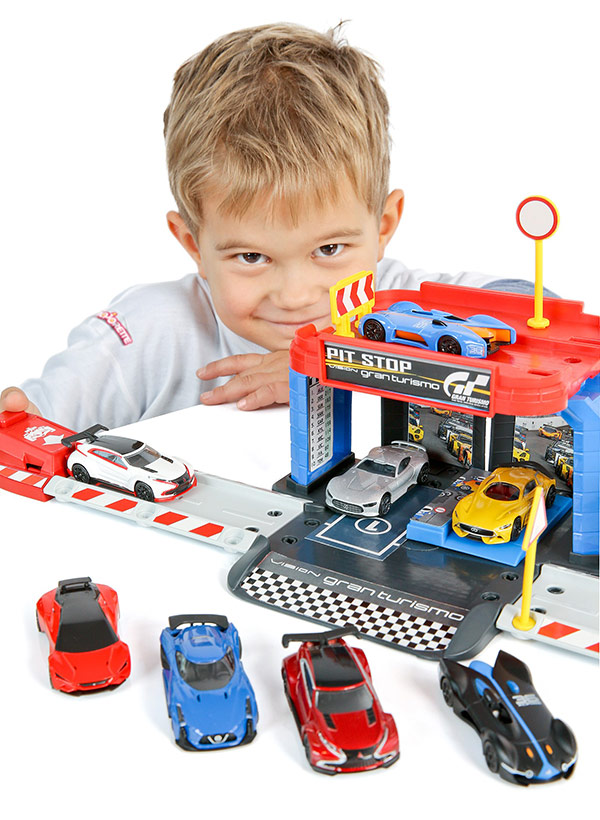 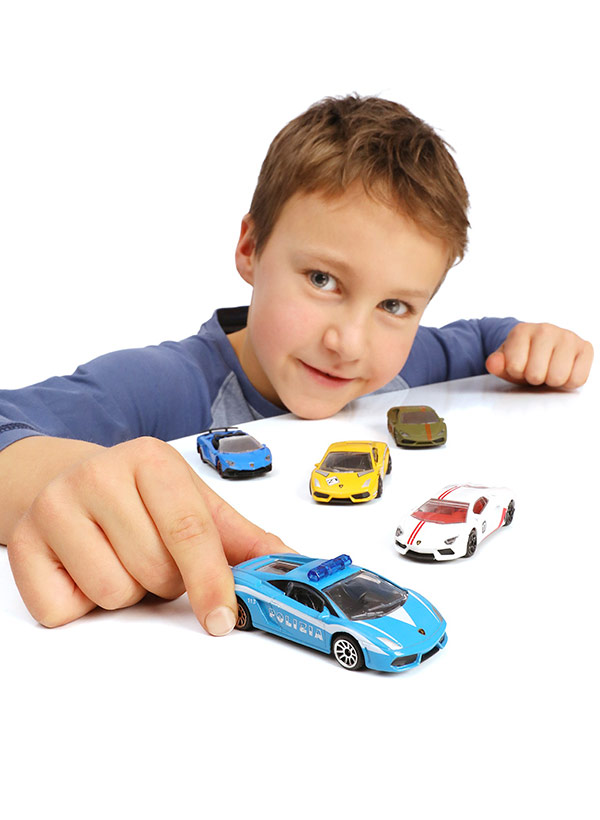 The BIG Bobby Trolley from BIG is the perfect friend for playing and travelling. As a robust hardside case, the faithful dog offers lots of space for storing valuables. By folding the handles away into the comfy seat, children can ride comfortably on the robust trolley or relax and be pulled along.

The BIG Aquafant with a mouse on top of his head offers so much water fun on hot summer days. The hilarious, elephant-shaped toy water sprinkler can be fitted to all common garden hosepipes. 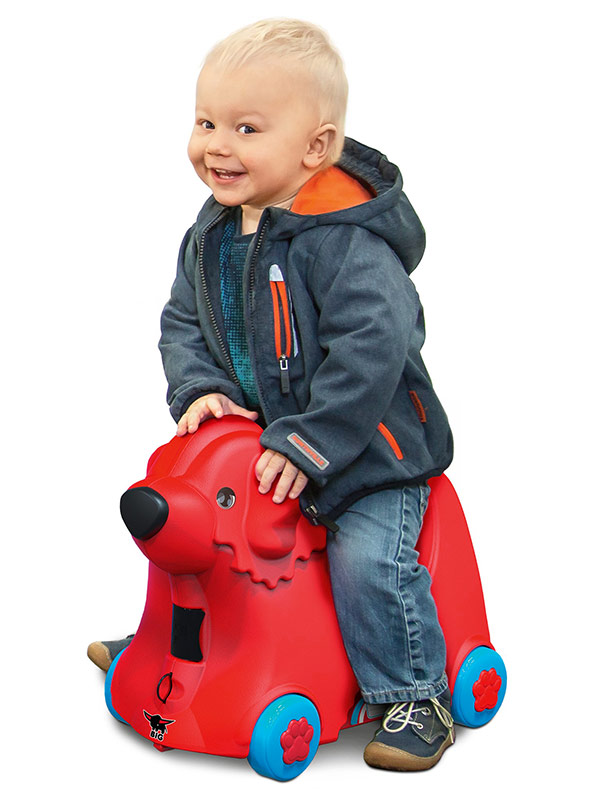 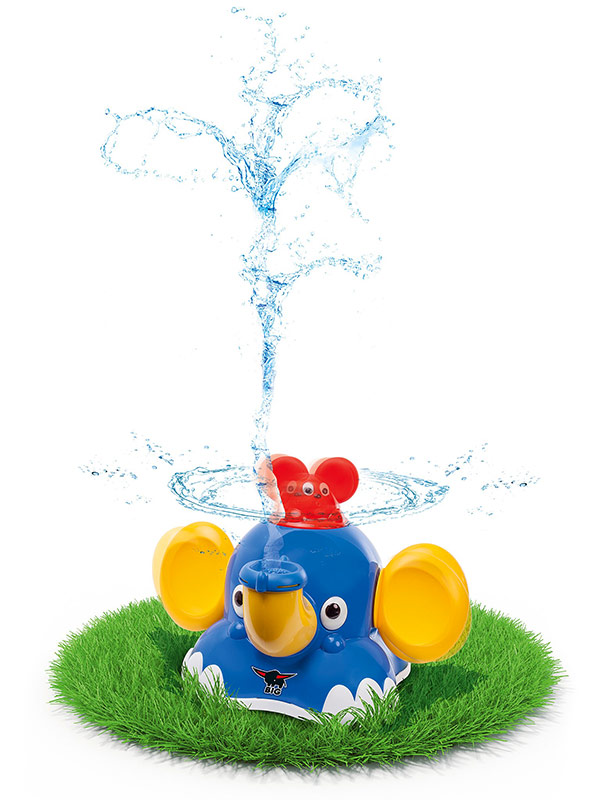 The AquaPlay Mountain Lake set brings a genuine sense of adventure to your garden. The large waterplay set consisting of 44 pieces lets children aged three and up gain early positive experiences with water.

They discover how water circulates and can change direction. Pumps transport the boats in the lock to the top of the mountain lake before you open the gates and watch the boats race down to the bottom. Schuco offers a diverse and attractive range of models for both beginners and more experienced model car enthusiasts. Thanks to their true-to-life details and metal chassis, the Schuco miniatures of this series on a new scale of 1:64 stand out from their competitors and are top quality replicas of favourite automotive subjects. Interesting new releases include the classic Mini Cooper ‘Open Air’ and the VW T3 ‘Joker’ high top.

In the Classic Motorcycle Edition 1:10, Schuco will really excite fans with a Victoria Avanti complete with rider (limited to just 1000 pieces worldwide). The authentic high-gloss finish, features such as rotating wheels and fully functional suspension are an integral part of these models and have established them as a firm favourite with motorcycle enthusiasts. 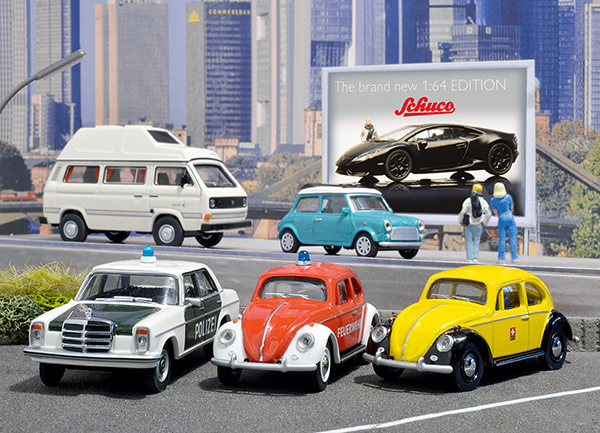 The new RC Microbike from Carson brings a real motorbike feeling to your home. The integrated mini gyroscope guarantees enormous stability for the small bike and allows you to perform manoeuvres even at low speeds and around tight bends.

The Easy Tyrann 180 Glow from Carson is the glow-in-the-dark helicopter for beginners. The new aircraft is equipped with powerful LEDs that illuminate the fuselage perfectly when flown at dusk. A version that enables spectacular take-offs and landings on water is the Easy Tyrann Waterbeast from toy manufacturer Carson. Its exceptional appearance makes the Waterbeast a real eye-catcher.

The prototype of the ‘Mercedes-Benz Arocs 3363 6X4 M-Cab Classic Space’ is designed for the harshest of conditions on building sites. Tamiya presents this fully functional RC truck on a scale of 1:14. Its many technical features will be showcased at the International Toy Fair in Nuremberg. 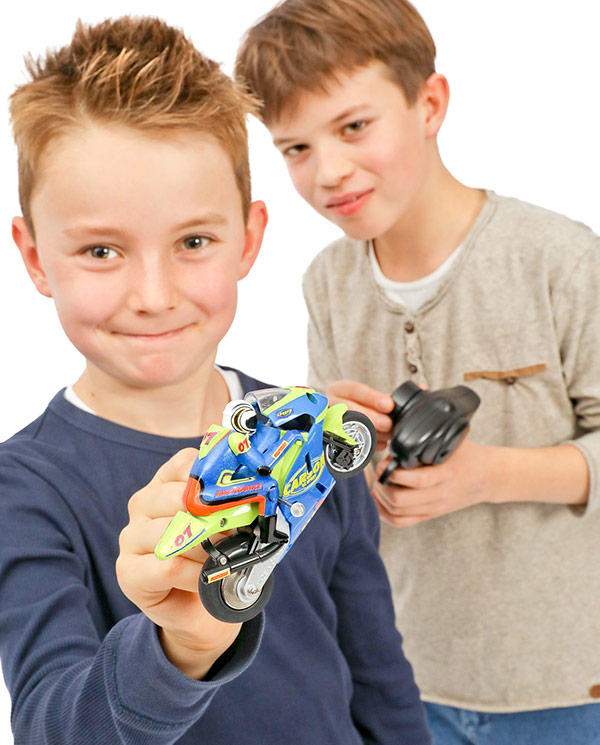 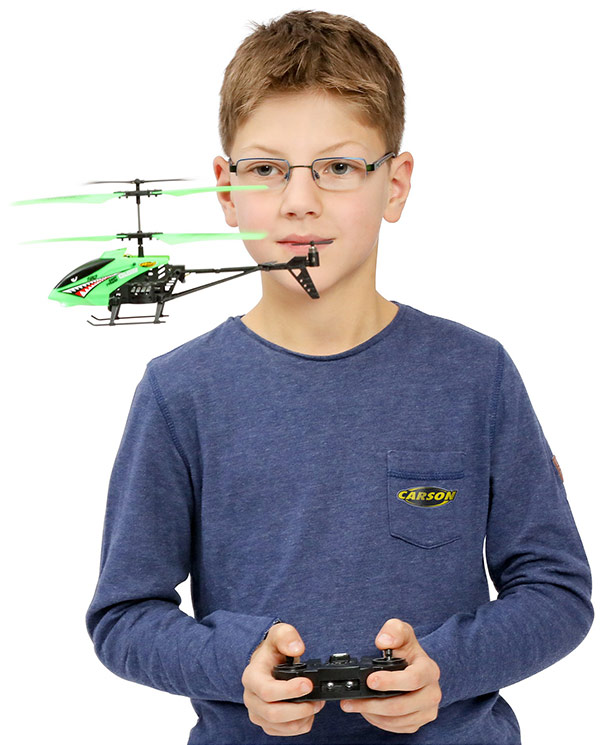 Schipper Arts & Crafts has made its popular paint-by-number method available to hobby artists who wish to paint colourful portraits of their own. Special image editing software developed by Schipper transforms a portrait photograph into a custom paint-by-number outline on canvas. For example, the hobby artist sends a chosen photo of their pet directly to the manufacturer. The pre-printed artist board is then delivered to the customer three weeks later along with the original photo. 'Floh am Po' from Zoch is an exciting and frantic dice race game for children as young as four. When fleas want to go on holiday, they simply hop on the back of a dog. Each player in this brand new game tries to be the first to reach the holiday destination with their dog. Coloured dice allow the fleas to jump from one animal to the next. This game offers children a never-ending sense of achievement and inspires them to never give up.

This year, Noris-Spiele welcomes children and adults alike to the world of Tabaluga, where you will find the little green dragon Tabaluga, the evil snowman Arktos, Lilly and the Ladybird. Memory games help to develop memory and observational skills. The popular characters turn the world-famous Crazy Eights card game into a great gift for fans of the musical. The new emoji™ collection from Undercover is expressive. Starting from summer 2017, school kids and students can express their feelings with backpacks, bags and stationery featuring happy emoji™ designs.

The functional modern yet casual bags, as well as emotional pencils, erasers, rulers and sharpeners adorned with the crazy icons will definitely spread a good mood, not just in universities and schools but also in the office. By continuing your navigation on this site you accept the storing of cookies on your computer and their use for the purposes of analysis, publicity and personal contents. For more information and to define your cookies, click on 'to find out more'.